Those automatic washer ads from the fifties tell a story that is over looked.

Cookie has noticed that increasingly young know-it-all - the ones that know nothing about history, herstory, ourstory - have been dissing 1950s and 1960s appliance ads.  Some complain that these ads, promising appliance happiness are:

1) "Nothing more than the consumer indoctrination of archetypical females constructs designed by men."
2) "Machines designed to enslave the housewife" while "burying her under the weight of consumerism."
3) "Products designed to transfer wealth from families to corporations..." and so on and on.

If you want the long history of laundry and the caustic chemicals that people tried to get their clothes clean, look it up on Wikipedia.  Suffice it to say that it was a labor-intensive, often-dangerous, back-breaking affair.  That is unless you were well off enough to have a laundress on house staff or at least a laundry you could send your clothes to.

"Electrified" clothes washers started emerging as commonplace after WWI.  They were nothing more than tubs, with wringers attached to them.

Quaint, looking, ain't it?  But for those of you that never saw your mother, grandmother, or who otherwise used one of these beasts, let's go over what it took.

First, laundry was done on a day of the week, usually by everyone changed with the duty.  And in most places that was Tuesday.  Why? People didn't burn their trash on Tuesdays, so the air was clear for laundry.  (And yes, Cookie remembers being at his grandparents in small-town Ohio and seeing people burning trash. But never on Tuesday.)

So a housewife has all day to do laundry, but at the same time, she has to cook, tend the children, and the husband.   So in the morning, the laundry got lugged to the machine.  These washer ringers were just that - they washed and they had ringers to squeeze the water and dirt from the fabric.  But they had to be manually filled.  So either that involved buckets of water or a hose run from the tap. And there was no cold water washing back then because there was laundry soap, not detergent, and you needed the hot water to melt the fats in the soap.  Once the soap was dissolved, the clothes were added in and the machine switched on, and the person doing the laundry would have to shut the thing down after a period of time was passed.

All of this had to be timed because unlike modern detergents, laundry soap was harsh on fabrics.  And - this is important - at some point, the water starts to cool and the dirt that had been washed out could re-adhere to the cloth.  So you get careless, busy with something else, and get down to the basement with soap scum floating about and your clothes would need to go through the process a second time.

Once the wash cycle was done and the machine turned off from just the washing, our housewife would remove one article at a time and run it through the wringer to squeeze out the water because these tubs didn't spin the water out - remember they have one speed, on and off.  The clothes were transferred to a dry sink basin or a basket.  A lever was manually thrown, and the tank drained, the drain closed and freshwater added, and the process repeated one or two more times, just for that load.

But wait!  Grandma or great-grandma wasn't finished!  There was hand laundry - delicate that had to be washed, lest they get chewed up in that machine.  And poor grandma or great-grandma now has to lug the laundry to the line IF it isn't raining.  There could be snow on the ground and the laundry would still go out and the cold would freeze the clothes.  If you were lucky, you had your own basement to run a few lines for bad weather.

And I haven't even brought up the cloth diapers that needed to be dunked and washed.  That was it's own nightmare.

Finally, while you are using this beast, IF it had four legs, you had to watch it to make sure it didn't tip over from the messed-up center of gravity.  Some manufacture over cam this by selling machines that five legs.

Now imagine having to go through several cycles of this each Tuesday.  It literally robbed women of the day because it took all day.  And Cookie hasn't even brought up the ironing because none of these clothes were wrinkle-free.  It ALL hand to be pressed - nothing was wrinkle-free in those days.  Luckily, Ironing could be done the next day, because dinner back then had to be made, and cooking takes time.

Now that we're exhausted by laundry, imagine what you will - in a post-war world where laundry could be compressed into a few short hours of one's time, without having to babysit the process and a fraction - not half, but a fraction - of the physical labor.  Sounds good, right?  That sounds like a freaking caprice! 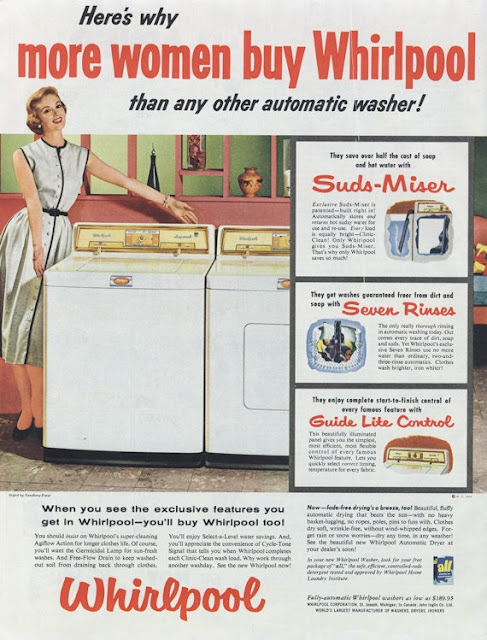 Well, this is what automatic washers and dryers brought to the housewives.  As advertised in the 1950 - even today, automatic washers and dryers delivered freedom from wash day drudgery.  Now laundry could be done any day of the week, or over the course of the week.  The machines took care of filling and draining the drums, agitating the clothes, and in some models (but not all) they would dispense bleach - something unheard of in their mother's day.

And now, with the advent of modern detergents, and multiple cycles, anything could be washed or dried.  On the Whirlpool model above, the gold buttons on the fronts of the machines were pushed to open the lid or the dryer door.   Fancy.

And as tract houses went up, houses without basements, where did the builder put the laundry machines?  Some in mild climates went into the garage, while others went into the kitchen, on main floor utility rooms.  Hence the beautiful pastel colors.  I mean if the family is going to have to look at, why not make it as lovely as the rest of the kitchen.  And as technology improved, so did the features of the machines.

And Cookie is just old enough to remember when his mother bought her mother her first fully automatic washing machine and my grandmother cried.  For the first time in her adult life, she had a day when she could do just about anything while the machine was doing the work for her.

So while we may look over these old ads, trust me - may seem amusing - if the appliances seemed glammed up, there was a good reason: they were buying their freedom from the drudgery of the washday blues.