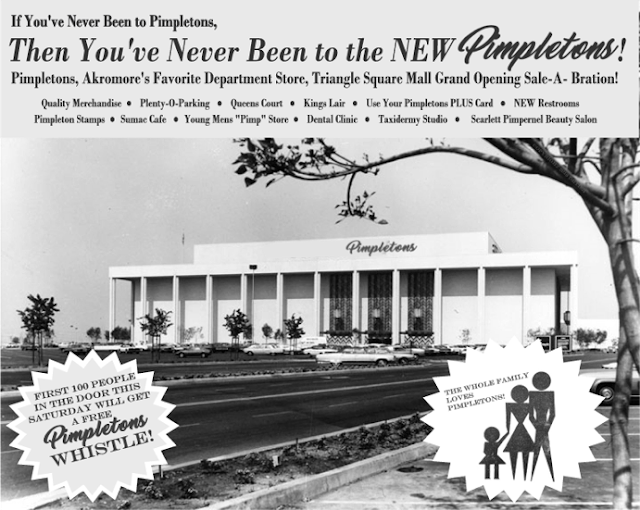 There is always an ounce of truth in advertising, Grant Tingley used to say.

Can't argue with that logic, can you?

Mr. Tingley said that Mrs. Gertrude Pimpleton was so taken by the Kennedy Center that she wanted the new store to mimic its modern lines and grand promenade.  Mr. Pimpleman sure got his money's worth.  They had also planned an apartment complex near the mall inspired by the Watergate to be name Akromore Gate, but the plan fell through when the owner of the 3-D Drive in refused to sellout.

Father used to love shopping with Mother at the Triangle Square Mall store.  While she would head to the Queens Court, Pop would saunter to the Taxidermy Studio for some relaxing and lessons on form molding, and skinning.  Their Sweet Tooth Candy Counter was a kids dream, and who didn't love those chocolate Pimpltons - when you bit into them egg cream would ooze out.  Perhaps skinning a chinchilla wasn't your dad's idea of fun, then he could the Vitalis treatment in the King's Lair, or hang around with the rest of guys who were waiting by the lower level men's lounge, where buxom young beer maidens served Ballentine with panache and gusto.

During Christmas Time, the store shimmered, but it was during the Festival of Purim that it really was festive, with a costumed Haman plotting extra discounts for women named Esther.

Despite the glory that was Pimpletons, it came to an end when Blemishmen Brother's opened their store, which included an AMC Dealership.  Who wants to hang around a taxidermy studio when the all new car from AMC (the first WIDE small car) is going to be unveiled.

Back in the day, the stores had their own credit cards 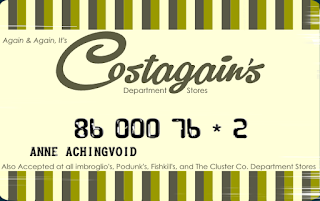 Grandma always used to say that Costigan's was expensive, and that unlike Macy's, their sheets seemed to wear out quickly.  Well, it was built into their name "New sheets?  Thats the second set you've bought this year, Maude.  There's that cost, again."  They did carry the better items, like Herculon impregnated wallpaper, the latest fashions from far away places like St. Louis and Pierre (South Dakota) and they had a grand court with a skylight up above.  Women, dressed in the finest new fashions would spritz you with cologne, and each clerk knew to ask "How may I be of service."  Two days after shopping a lengthy thank you arrived.  How nice it was.  Then things changed and Sears came to town.  Costagain's held out longer than their sister stores, imbroglio's, Podunks of Cresent City, and Fishkills.  They had a discount chain as well, Cluster's, but shoppers found it confusing as the departments and rows were moved every night to provide a new shopping experience every day.  But their all gone now  Last I had heard, the grand downtown Costagain's location that once housed a six-story Christmas tree, delightful cafe's and it's own subway stop, had become a Pizzeria Uno, but my sister informs me that it is now the home of Mother Waddles' Mission of Perpetual Healing and Nail Salon. 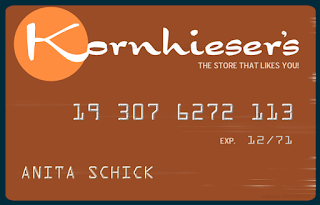 Kornhieser's customers always aspired to shop at Costagain's, but the monthly checks from child support always seemed to show up late, if they showed up at all. And even then, all the checks from all the father's had to show up just to afford a cup of tea in Costigan's Plaid Room. Still, their boys "Korn Husky" section was tops in the tri-county area.  Who could have imagined that blue jeans can in so many shades of dark blue?  And while their Petunia Porcine line of clothing for chubby girls tried every it could to herd them in, its was their meat department that packed them in. 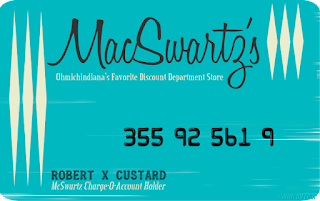 Even though its been fifty years, I can still smell the stale popcorn roasting under a heat lamp. Shopping at MacSwartz's meant being organized.  When dad needed a pair of white socks to wear with his grey work pants and black oxfords, Mom would load us up in the car and off to MacSwartz's to rummage through their loose sox section.  When my sister hit "that age" and stopped wearing Carter's, she'd wander off to the mismatch cup bra bin to find something to make her feel grown up.  "It's Nifty! It's Thirty! To shop at MacSwartz's" was their jingle that crackled over the speaker.  Woe to anyone who tried to make a return - Mrs. MacSwartz, who was born in Glasglow's Jewish neighborhood was good for sizing up those who didn't know the store policies, and those who were her family members.   Eventually, MacSwartz's closed and was replaced by an indoor Yahtzee arena. 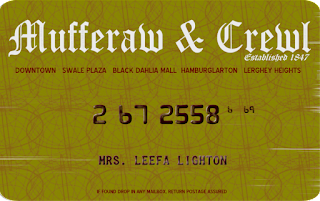 Mother would make us dress in our finest if shopping to Mufferaw and Crewl was on the list of errands to run.  We were greeted by valet parking, and doormen. Inside, the dark paneled walls stretched from marble floors to ceilings two and three stories high.  Men in cutaway coats bowed to us as we made our way to the Buckingham Room for a hearty meal of cucumber sandwiches and weak tea.  They had the largest selection of walking sticks, silk ascots and elephant guns in the area.  They had to expand to Swale Plaza during the post war boom - this meant that instead of familiar pneumatic tubes that carried the sales receipt up the cashiers, that actual cash registers were installed - a first in its 100 year history. Mother said their downfall was the store at Black Dahlia Mall.  The silks seemed less diaphanous, the furs seemed less lush and dyed. School girls cutting through the store on their way to shop at places like Merry Go-Round, a misnomer if ever there was one. From there it was literally a downhill skid to Hamburglaton and finally the miasma prone Lerghey Heights store with its shockingly modern revolving door.  When the announcement came that the stores were shuttering, management did not say that they would close, but "we will no longer receiving customers at our locations."  Dignified until the end, the main store downtown is a Korean "health spa".
Posted by The Cool Cookie at 11/29/2016 03:47:00 PM 12 comments: 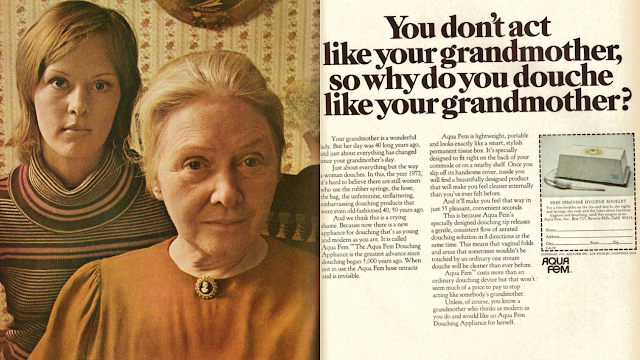 Well there Miss Deer in the Headlights? We want to know.  Do you wash your mimsy like the grandma?

"Deary, when you wash your lady parts, remember the Johnston Flood..." you can hear her saying.

You could have had this.  No more Lysol like Gram.  Nope.  Not you.  You need this thing.

Well, what do I know about the secret lady parts, anyway.  To me you take a couple moments in the bath or shower.

And as a public service, who would buy their grandmother a an electric douche nozzel?

According to the last paragraph, the Aqua Fem makes a great gift.  Until gramps confuses it for his WaterPik. 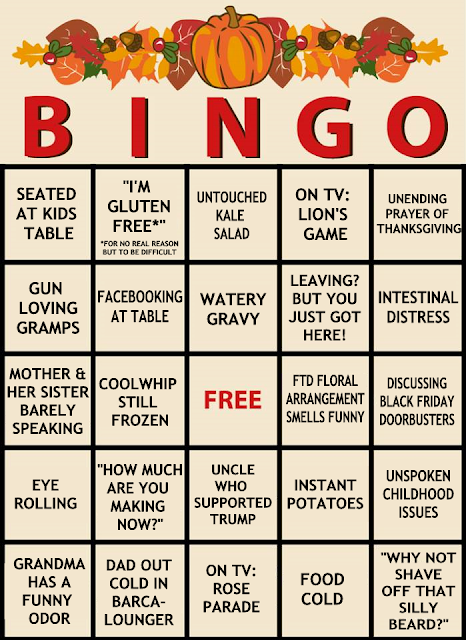 When you fall down, you gotta get right back up, again. 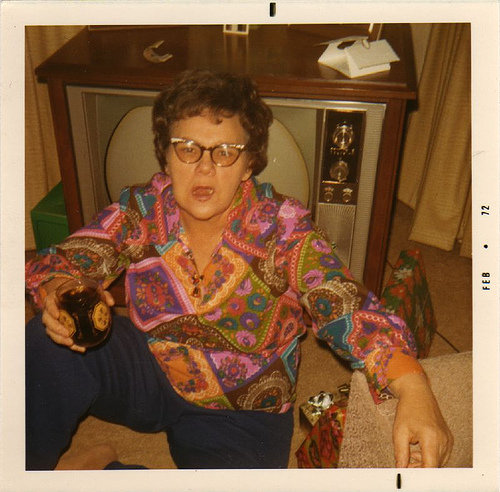 It has Cookie a week to start to feel normal.

We will get through this, we will endure, and in the long run, we will survive.

But I have come to the conclusion that while Donald Trump is dangerous, Mike Pence is scary dangerous.  HE, in the long run can end up screwing all of us out happiness and security.

Start NOW.  Get involved in your LOCAL Democratic Party.  Volunteer.  Help write policy.  Throw fundraisers.  The work to stabilize the Senate following the 2018 midterms (and there are shitload of vulnerable Democrats up for reelection that year in the Senate) and take back the House of Representatives. 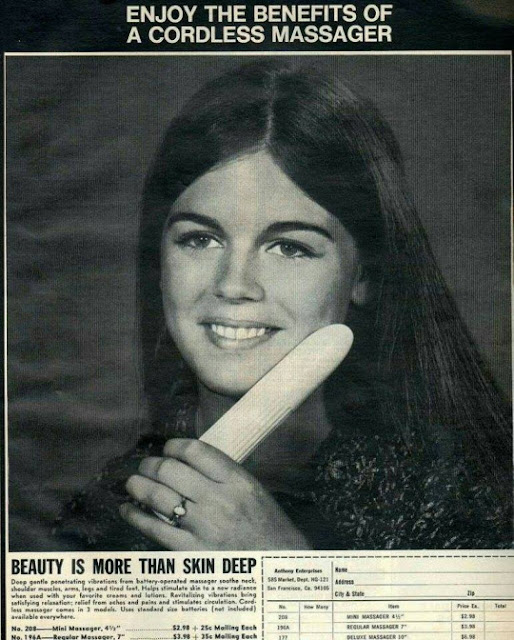