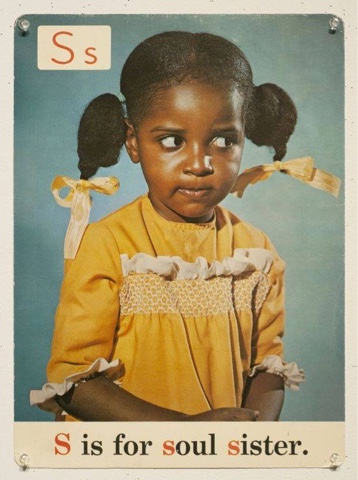 God Bless Norma Desmond, because he forced me to face that dratted bathroom and photograph it, and that led to a frank discussion with the husband, which led to some plans and some action. 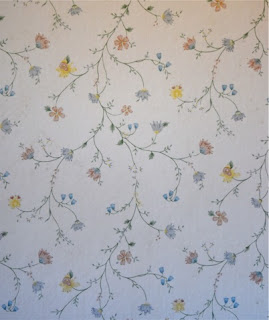 Here we have the offending wallpaper.  I am sure it was lovely when Jimmy Carter was in office, but it really bugged us.  We thought it was because it was to feminine, too whispy, too old lady.  Or it could have been because it was a sloppy installation that was now peeling.  But upon looking at the photograph we realized something else.

It was on the wall upside down.

That led to a rash decision:

It may not seem like much of an epiphany, but it was certainly cathartic taking it down.   But now the bathroom, well, it seems workable in the short term.

Now the bathroom floor (1950s) actually matches the shower curtain, in the blue/teal/blue color pallet.  The towels were just thrown up because they matched the blues in the wall paper, so yes, they are a hot mess.  And ignore the clutter.  I know it's a mess.

The lower walls are crappy old white subway tiles - but wait - that are actually gross and started to brown because in the Maryland humidity and heat, the little hairline cracks that formed in them over the last 80 years allowed moisture into the base ceramic turning them a mottled tan.  So someone painted them white, which is actually a good thing.

And the clutter is just because junk gets piled in a room that no one wants to "own".  So look beyond that.

Anyhow, Husband and I have thought about it and here is the game plan, both short term and long range:

1) Do an immediate replacement of the toilet.

2) Do a replacement of the vanity to a euro-styled basic one after Christmas.

3) Strip the dried wallpaper paste and paint the walls a light shade of the darkest shade of blue in the floor.

In two years look at the finances.  If they are rosey and the kitchen isn't going to break the bank, then go whole hog and extend the wall out six foot and redo the bathroom.

If the kitchen breaks the bank, scale the bathroom back.

BUT if we do bump out the wall six feet so its over the breakfast room, then we'll also bump out the wall on our walk in closet six feet, and relocate the master bath to the larger space created by the extra 30 square feet in the closet - which is already enormous, and then convert the current cramped master bath into the new walk in closet.  And because the relocated bath would share the same stack and plumbing, the cost of moving the master bath is minimized.

Frankly the idea of getting the master bath to the back of the house makes me really happy because right now there is a big old window in the current bath smack over the front door.  Turn on the light and with the blinds closed everyone knows someone is in the bathroom because its in the middle of the freaking house.

So tomorrow I will spend the day measuring, and pricing toilets, vanities, lights and sketching.

But a new toilet is coming to live with us sooner rather than later.   Because regardless of what we do, when we do it, we all need to crap in the present.

The new House: An update 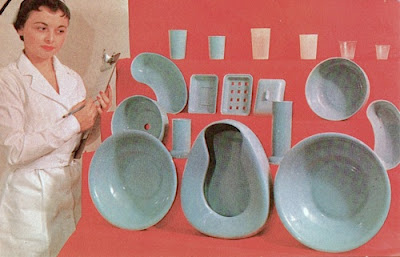 Slowly but surely the new house is moving from being the home of two 85 year old Quakers into a house fit for Cookie and The Husband.

It's a small room to begin with, but making it even smaller is the GI-NORMOUS bath tub with is very narrow but also very long.  Think Abraham Lincoln sized bathtub.  To modernize this, elderly couple paid Bath Fitting gawd knows how much to come in and update their bath tub.  Big mistake.  The key to bath fitter in that mold a sort of plastic condom that get dropped over the tub.  When they did this, they created a one foot lip that one has to hurdle to get into said tub.  And because the tub walls are so high and narrow, getting out is chore.

Adding to this oversized tub is the 10" toilet (measured from the mid point of the discharge pipe to the point where the wall should be) sitting on a 14" offset waste pipe.  This places the toilet in the middle of the bathroom with four inches of space behind the tank.  When you sit on our pot your knees jam into the tub.

Then there is the sink and the sink base.  The sink base is 30", which is too large for the room.  The vanity top is (and you have to say this the way Gloria Grahame spoke to Jack Palance in Sudden Fear)  "cul-chured mahble"  Again, this doesn't fit snug to the wall.

Add in bad lighting (pull chain light over the sink and a ceiling fan light), and two windows, and 1950s blue tile floor and you have my nightmare.  Oh, wait; I forgot; yellowing wall paper that is peeling.

Now I have three ideas for spending my husbands money to fix this:

The more expensive alternative is extend the bathroom out six feet (which would take it out over the breakfast room) and redo the place with new tile, tub, toilet and sink.  This would eliminate one window while making the other window larger.  Approximate cost $38,000. Our realtor is pulling for this because when we do decide to sell, this will be one of the "sexy" things that they can feature.

The less expensive alternative is keep the same foot print, remove the tub and replace it was something modern, new tile, toilet and smaller vanity and better lighting.  Approximate $10,000.

And the el-cheapo route is keep the tub as is, replace the vanity with a euro-styled one and the toilet.  Approximate cost $1,000.

Doing nothing is not an option, because the room is beyond foul.

Thankfully it's not the only bathroom, just the worst.