When you can't cope, take Cope®

Cookie has always been fascinated with the marketing made toward women in the 1940s-1960s because it was mostly created by men who knew very little about what women really needed.  Instead, they decided to tell women what was good for them, and most of the time, it wasn't.
From fashion to dishwashing detergents, from haute couture to hot meals in minutes, and from drudgery to sexuality, Madison Avenue advertising firms and corporations twisted minds and sent subliminal messages.
Today we focus on Cope® a pain reliever from the mid-1960s, targeted at women as a cure for tension headaches - the type brought on by the demands of being a woman. 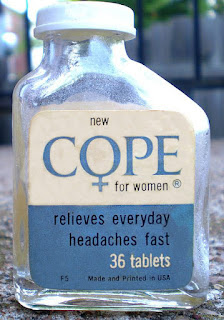 Make that a white woman upper-class woman, because only white women appeared in the ads.  And Cookie couldn't find a print ad in a major marketing magazine that was targeted toward African American women.
Unlike plain or buffered aspirin or other pain relievers, Cope® was marketed exclusively to "better" women, containing salicylate (aspirin), caffeine, and a mild relaxing agent to calm one down. And here's the important thing - the relaxing agent.
Anacin® promised the same type of headache relief, but in a more in-your-face, working-class fashion:

But women of a certain class, evidently needed a different message, one that was softer, one to help them COPE. Cope® would take away the headache, indirectly promised tranquility.
Even the Cope® bottle was different with an off-side neck and opening.
The label stated that the product was for women, and just in case one had any questions, a Venus Symbol appeared on the label.
In other words: NO MEN ALLOWED.
Commercials for this product featured middle and upper-class women - much like Shaker Heights housewives - happily and proudly interacting with family members. Voiceovers came from men - calming, soft-voiced men.  The implied message is "Men knew better."  And what set off these headaches was that Cope® was the best treatment option.
And just what set off these Cope headache moments?  Not men.  Not money problems.
It was children.
And it just wasn't any child, that set these headaches into motion.  It was little girls, around the age of five or six.  Little women pushed mature women over the edge, and into a world where they needed to be calmed down. And Cope® would make it all better. See:
Cookie felt it should have been an ad featuring a daughter who was about 12-14, and oppositional.  The type who gets in a mood and retaliates at authority by saying "You're the worst mother, EVER!", or a teenage son who mutters "bitch" under his breath when she finds junior hanging with the wrong crowd and forbids it.
But those were moments when one was at the end of one's rope, a valium might be the better option. So no, Cope Of course, Cope® is no longer sold in the US.
No, now mommy takes the edge off with a bottle of wine, but that's for another time and rant.
Posted by The Cool Cookie at 11/17/2022 04:39:00 PM