(L)One Star out of Five ain't good: How does Memphis Hatwrks see itself

By now you have most likely heard about asshats at a store in Nashville, Tennesse, who think it's merchandising a Star of David patch to advertise their callous position that being an anti-vaxer in America is akin to being a Jew in Germany during WWII.  And then the alleged owner, took a photo - pleased as punch mind you - wearing that star which now reads "NOT VACCINATED".

Evidently, said woman, thought this was a good idea.  Other articles talk about that and how she is defending the creation of the symbol while attacking those who find it offensive.

That's a bit like a car theif claiming to the court that they are innocent because there are people out there murdering people, so ignore what I have done and be outraged over something that is worse than I have committed.

Doesn't work well as a defense, does it? No.

She didn't name those other more outrageous things, she just uses them as her shield of self-rightousness.

And you'll have no problem finding an image of said owner proudly wearing what other people know is an outrage. After all, she is entitled to her opinions, and we are entitled to our opinions.

But Cookie was curious - what else do they sell that demonstrates their profound lack of skill about the world around them.  After all, stealing a symbol of torture and slaughter for your own deplorable purpose doesn't happen in a vacuum.  It's usually an accomplishment, according to the Peter Principle.

First, we need to clarify something. Nashville Hatwrks seems to revel in the fact that they have a "Lone Star" attitude.  You know, that school of thought that leads people to say things like "Don't Mess with Texas".

To the owner, the Yellow Star of Anti-vax is just another example of that "Lone Star" pride.

So Cookie went to their site, TODAY, and found something that is quite common - a company branding piece of appearing.  After all,  L.L. Bean sells tee shirts with their logo on them, so do other companies.  So why wouldn't these people?

My search criteria were simple, just the word "shirt". 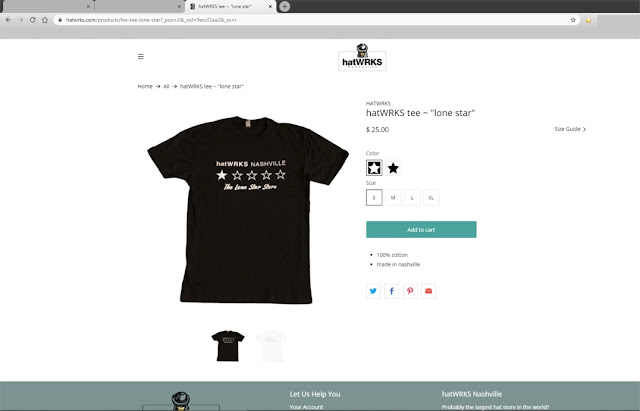 If you want to verify me and the finding, go ahead and copy the following link to said piece of merchandise is: https://www.hatwrks.com/products/hw-tee-lone-star?_pos=2&_sid=590e18089&_ss=r

Evidently, even day-to-day irony is lost on the people running this store. They think that this shirt calls attention to the fact that they are the Lone Star Store.

But isn't a "lone star" is an ALONE star?

Not a star that is different from the others near it.

There are no other stars near a Lone Star because it's supposed to be alone.  Even Merriam Webster breaks it down for us thus:

1) LONE - "having no company: Solitary.
2) STAR - "A conventional or stylized representation of a star, typically having five or more points."

That "ART? That one star is not alone.  They are four stars to the left.  Empty Stars.

So shirt says that Nashville Hatwrks is a store that only ranks one out of five stars.

That's right folks, they are selling shirt what looks like a terrible rating on Yelp.

And the irony? They are the ones giving their own store and their brand, one out of five stars.

Now imagine the people walking around wearing the said shirt, or said ball cap.  Well, they are a hat store so they have to advertise on a hat.

The only star that is alone on that shirt art is a pure WHITE star.

And the irony of that?

That's their mindset and their misplaced point of pride.

UPDATE:  News sites are telling us that Stetson Hats is dropping  Nashville Hateworks, I mean Nashville Hatwrks as a client.